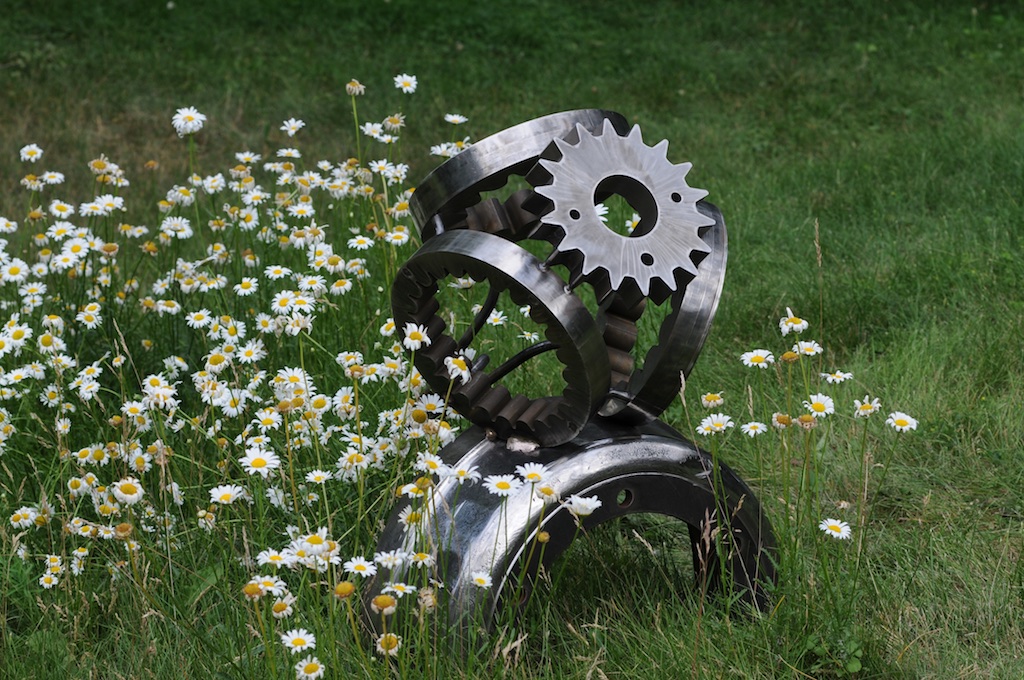 In May 2009 I entered my first sculpture contest, the 9th annual “Art of Recycling” sponsored by Northern Metal Recycling. Participants were invited to visit the scrapyard for 1 hour to collect a limited amount of metal, then submit completed works for judging 5 weeks later. Prizes were to be awarded during an exhibit opening held at the scrapyard, then the works were to be exhibited on Nicollet Mall in front of the IDS Center during the Minneapolis Aquatennial.

I was taking a welding class at the Minneapolis Community and Technical College and thus had access to very nice shop facilities as well as support and encouragement from both teachers and fellow students. The class title was “Welding for Artists” so the focus was broad and the projects diverse. I was a bit intimidated by the sculptures in prior years’ contests, many of which were by very accomplished artists, but didn’t let that stop me.

With limits on both time and the weight of metals I could take, I went somewhat prepared with an idea and plan for what I wanted to make. Although the scrapyard was enormous I wasn’t able to find the type of material I had in mind, so I wound up with a selection of parts that interested me. Later on as I stared at my collection & thought about some of the other entries I’d seen, I really wondered what I’d gotten myself into. After a while though, a new idea began to take shape. The main work was done at the school shop which provided access to a TIG welder while the rest was done at home, mostly in the garage.

There were more deserving sculptures than prizes, and mine titled “Max, The Observer” wasn’t awarded anything, but I was certainly pleased with my accomplishment and encouraged to participate again should I have the opportunity. After the Aquatennial exhibit several of us gathered to exhibit our sculptures at a neighborhood street festival as well as the Powderhorn Art Fair, both in Minneapolis. Sadly 2009 was to be the last year this particular contest was held.